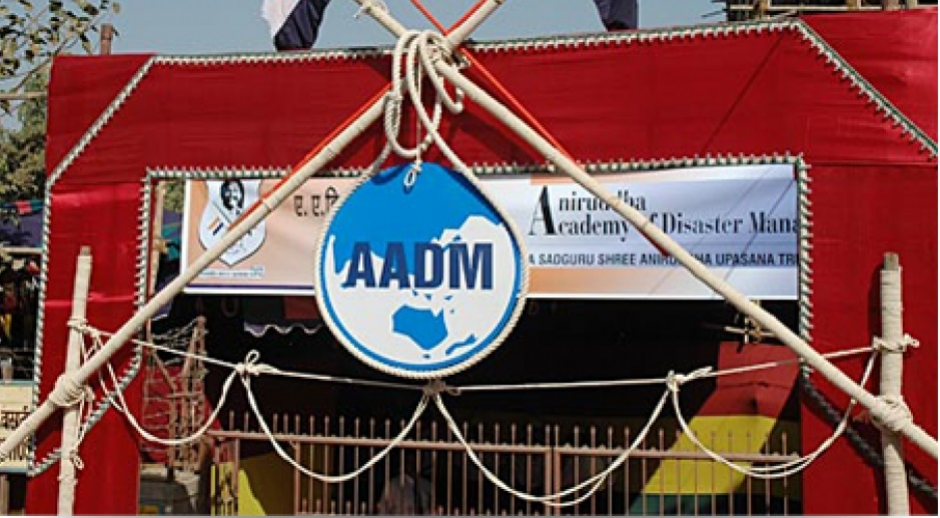 Aniruddha’s Academy of Disaster Management (AADM) commenced its mission as an activity of Sadguru Shree Aniruddha Upasana Trust (SSAUT) in early 2002. It continued to be a part of SSAUT until April 2005. At this time it was felt that AADM had achieved the desired ‘critical mass’ and grown big enough to branch out on its own. Thus it became a separate independent entity in April 2005.

SSAUT itself was formed in May 2000 as a public charitable trust under the Bombay Public Trusts Act, 1950. SSAUT has, over the years, undertaken several initiatives in the area of devotional services (a term preferred over ‘social services’, as bhakti is the base of each activity). All the major religious functions such as Ram Navami, Guru Pournima, Aniruddha Pournima and Dhanalaxmi Poojan are organized every year under the auspices of SSAUT along with other sister organizations. SSAUT has also undertaken a major initiative in the field of education, (again with bhakti as the base) by setting up the Govidyapeetham at Kothimbe, around 18 km from Karjat. This institution will impart specialized knowledge on Govind Vidya and Gopala Vidya for which the groundwork has already begun. SSAUT has also set up the Atulita Baladham, a centre of great spiritual significance, in Ratnagiri.

SSAUT is a recipient of award from the the Governor of Maharashtra for having collected the maximum number of bottles of blood through blood donation drives.

Shree Aniruddha Upasana Foundation (SAUF) was incorporated as a charitable organization under Section 25 of the Companies Act, 1956, in April 2005. It’s principal object was the propagation of the teachings of Sadguru Shree Aniruddha Bapu. The Foundation holds the exclusive rights and the privileges for granting recognition to Upasana Centres, (which are basically groups of devotees in a particular locality coming together for performing the Upasana of Shree Aniruddha Bapu) regulating their functioning in line with the code of conduct laid down by it. As of date there are more than 500 Upasana Centres which are affiliated to the Foundation. From the time of its inception, SAUF has undertaken various initiatives in the field of education, relief from poverty and medical relief. The list of activities undertaken by SAUF, many of them in partnership with sister organizations are given in the Annexure.

Shree Aniruddha Aadesh Pathak (SAAP) was incorporated as a charitable organization under Section 25 of the Companies Act, 1956, in March 2005. Its principal objective was to develop highest ethical and moral standards, inculcating values of co-operation, dedication and instilling a feeling of patriotism and national unity, through promotion of spiritual, physical, mental and educational development based on the teachings of Shree Aniruddha Bapu. SAAP has taken up the implementation of the Thirteen Point Programme announced by Shree Aniruddha in October 2002 as its main plank for achieving its objects. The Thirteen Point Programme is a revolutionary grassroot concept that has worked beautifully, wherever it has been implemented. Besides, the Pathak also collaborates with its sister organizations in respect of other activities of devotional service.

Aniruddha’s Bank for the Blind

Aniruddha’s Bank for the Blind (ABB) is an organization dedicated to the service of the visually challenged. Functioning like a ‘bank’, it stores knowledge in the form of audio CDs that record the academic syllabus of educational and technical institutions and makes these CD’s available free of cost to visually challenged students.

Agriculture is the backbone of the Indian economy. But even after the Green Revolution agriculture still isn’t a reliable occupation because of multiple factors like unreliable nature, lack of irrigation, lack of political will, lack of guidance and apt information. Further with unrestricted use of chemical fertilizers and pesticides, lack of novel thinking and illiteracy, today’s small farmers and agricultural labourers from rural areas are caught in a perpetual, unending and vicious cycle of loan which is leading to farmer suicides. To resolve this problem Sadguru Bapu after a deep study designed and launched this project.