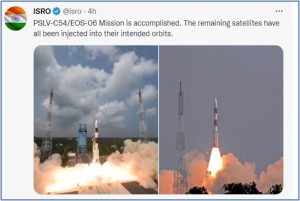 The Indian Space Research Organisation (ISRO) has launched its EOS-06 (earth observation satellite) along with eight other nanosatellite payloads, at 11.56 am Saturday, 26th November 2022, on the (Polar Satellite Launch Vehicle) PSLV-C54 mission from the First Launch Pad in Sriharikota.

The mission will see the primary payload, the EOS-06, separating first, followed by a change in orbit, after which the smaller customer satellites will be deployed into a different sun synchronous polar orbit (SSPO).

34-years old, Sanjay Nekkanti, the CEO and co-founder of the Hyderabad-based space tech startup Dhruva Space, says Hyderabad-made satellites Thybolt 1 and Thybolt 2 are for the world and dedicates this launch to amateur radio ecosystem.

This mission will be non-commercial for Dhruva Space, but it will help validate the startup’s satellite platform, which Thybolt 1 and 2 use. The satellites were built entirely in Hyderabad with the assistance of approximately 20 MSMEs. 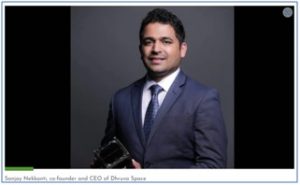 Nekkanti believes that the only way anyone can currently experience satellite functions is by becoming an amateur radio operator (also known as a ham radio operator). Its most common use is during natural disasters when other forms of communication are unavailable, he explained. It can also be used to communicate over long distances by relaying data through a satellite.

“Once you become a ham radio operator, you will get a letter from the Government of India allowing you to own and operate a wireless station,” Nekkanti said. The Thybolt 1 and 2 satellites will benefit a large number of amateur radio operators worldwide.

He acknowledged, “Many amateur radio (ham radio) clubs in India have supported Dhruva Space’s mission, including the Star Fleet Amateur Radio Club (formed within Dhruva Space), the National Institute for Amateur Radio (NIAR), the Indian Institute of Hams, Aniruddha’s Academy of Disaster Management, and others.”Lamakaan Amateur Radio, based in Hyderabad, also assisted in the testing and qualification of these satellites.