The city of Jeddah, Saudi Arabia, on Thursday 2th November 2022,witnessed torrential rain and flooding, accompanied by storm, thunder and lightning, causing the suspension of schools, delays in flights, and the closure of the road leading to Makkah Al-Mukarramah for hours. Two people lost their life in these floods.

The Kingdom’s National Centre of Meteorology said that the amount of rain that fell on the city of Jeddah on Thursday, within 6 hours was equivalent to what falls in a full season.

It recorded the highest amount of rain in Jeddah Governorate, from 8 am to 2 pm, which amounted to 179 millimetres.The dry, dusty streets of Jeddah turned to rivers, as the Saudi city was pounded by torrential rain. Flooded roads brough Saudi city to standstill.

After the heavy rains in residential neighbourhoods, such as the Al-Nuzha neighbourhood and Al-Zahraa neighbourhood, terrifying torrents swept away dozens of carsand caused the huge amount of destruction.

Saudi journalist Khalaf Al-Dosari published a video clip showing the torrential rains, and wrote in a tweet, “Historic torrential rains and unspeakable scenes now!… God bless everyone.” Another Twitter user wrote, “The 2009 scenario is repeated today. A local newspaper said the rain brought back shocking memories of the devastating flooding that struck Jeddah exactly 13 years ago in the same month. 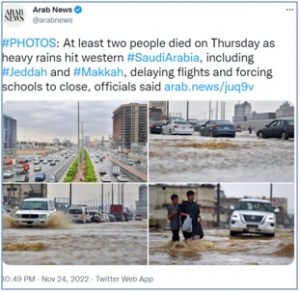