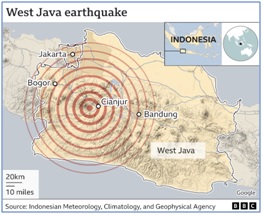 On 21st Nov at 13:20 hrs local time, earthquake of magnitude5.6 struck the heavily populated town of Cianjur in West Java, Indonesia, at a shallow depth of 10km (6 miles), according to US Geological Survey data.The death toll so far has been reported at 268 including many children. There were about 80 schools in the affected area. Around 151 people remain missing and more than 1,000 are injured.

West Java governor Ridwan Kamil told the BBC that the region had experienced around 140 shocks since Monday’s earthquake and local community was still exposed to these aftershocks, which have in some cases put responders at risk. The rescue teams are still traversing the ground on foot and motorbike, with roads and paths not always accessible, but that they also had helicopters on standby to transport people who were found to hospital.

The National Disaster Mitigation Agency which has estimated 22,000 homes have been damaged, at least 58,000 people have been evacuated with dozens of refugee camps set up around the area, said Mr. Kamil.

Earthquakes are common in Indonesia, which sits on the “ring of fire” area of tectonic activity in the Pacific.The country has a history of devastating tremors and tsunamis, with more than 2,000 people killed in a 2018 earthquake on the island of Sulawesi. 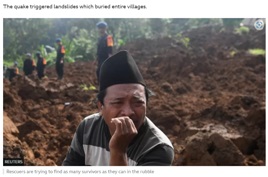 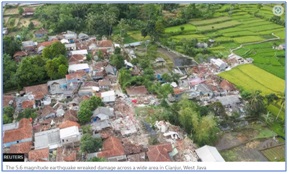