Most of the casualties from Nalgae, the country’s 14th cyclone this year, were in the southern autonomous region of Bangsamoro because of rain-induced landslides in deforested areas.Most of the victims were swept away by rampaging floodwaters and drowned or were hit by debris-filled mudslides in three towns in hard-hit Maguindanao province.

The tropical storm, which was reported to have made landfall in the eastern Catanduanes province on 29th Oct 2022, Saturday, had maximum sustained winds of 95 kilometres (59 miles) per hour and gusts of up to 160 kph (99.4 mph).

Nalgae is headed for southern China after damaging $22 million worth of farm goods and $13 million worth of infrastructure, government data showed. It is the second-most destructive storm to hit the Philippines so far this year, after tropical storm Megi killed 214 people in April.

The Philippines, an archipelago of more than 7,600 islands, sees an average 20 typhoons a year, with frequent landslides and floods blamed on the growing intensity of tropical cyclones due to climate change.It is located on the Pacific “Ring of Fire,” a region along most of the Pacific Ocean rim where many volcanic eruptions and earthquakes occur, making the nation one of the world’s most disaster-prone. 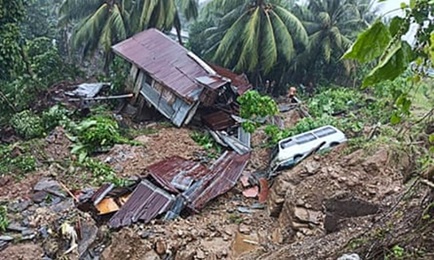 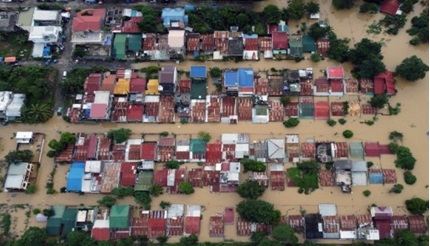 An aerial view shows flood-inundated houses at Capitol Hills in Alibagu, Ilagan city, Isabela province on October 31, 2022, after Tropical Storm Nalgae hit the region. The death toll from a storm that battered the Philippines has jumped to 98, the national disaster agency said October 31, with little hope of finding survivors in the worst-hit areas. – AFP 31st Oct 2022: photohttps://www.newagebd.net/article/185155/philippines-storm-death-toll-increased-to-98