Uttarakhand also known as Devbhoomi for its heavenly beauty, however, some parts of the state have virtually been a hell for its residents, and a cause of great concern to fellow Indians.

Forest fires which have been raging from February 15th of 2016 have turned the region into a towering inferno. 9 people have been killed and about 4,700 acres of forest land destroyed. As of May 1st, there were 400 odd fires burning simultaneously affecting the quality of air and creating poor visibility.

Forest fires are regular occurrence in Uttarakhand in summer. However this year fires have been more widespread as in 2012, due to low rain and extreme dryness.

Experts are greatly concerned about the fires , as it is felt that these regular fires will have a devastating effect on the glaciers which keep the rivers flowing  in the Northern Plains of India. Further , the experts feel, the black carbon from the smog will cover the glaciers and cause the glaciers to melt fast. The water from these glaciers may be heavily polluted due to harmful particles and compounds from the black carbons and may not be worth drinking.

The black carbon absorbs light and increases heat. The fires have already raised the temperature of the area by 0.2 degrees Celsius. The scientists fear this would affect the normal cycle of monsoons in the coming years. Also as the black carbon goes upwards, its interaction with the clouds may lead to complex problems which have yet to be studied.

These regular burning infernos which have decimated the forests are now giving the State machinery such jitters that a need is felt to scientifically understand the causes of fires so the future loss of bio-diversity is prevented.

Dry weather , low precipitation and lack of hydration in the atmosphere are some of the natural causes. Forest officials largely put the blame on human activity or man made fires. 48 cases have been filed against locals for setting fires in the forest for commercial purposes for collection of   timber, to stock dead fuelwood for cooking or warming or for building concrete jungles. There are certain cases of negligence also when locals throw bidi or cigarette buds in the fields, or burn leaf litter or pine needles

Forest ecologists who have studied Uttarakhand forests in depth are firm in their view that the entire forest eco system has to be built up. All others would be band aid application to wounds which are far deeper .

Ecologists tell us that prior to 1984, the  forest fires happened but the locals put them off. Fires remained extinguished. However, after 1984 forest fires have become  more or less a  regular feature.

These regular fires have changed the composition of forests in Uttarakhand. The broadleaf humid evergreen forest slowly decimated and in its place the dry  stands of chir pine grew. These chir pines are fire traps in summer. As the fires happened every year the perennial water springs dried up and with it the wildlife  exterminated. With the disappearance of broadleaf forest, Uttarakhand became exposed to the fury of southwest monsoons as well as the Ganga. Hence we witness the flood fury in Uttarakhand time and again.

The finest  and an everlasting solution to the Uttarakhand fires ( as well as floods ) would be to rebuild the forest ecosystem  as it was prior to 1984. This would require an all round   genuine effort.

a)      Uttarakhand Government would have to be very careful that the laws passed regarding forests have no loopholes for vested interests to take advantage off.

b)      If there are forest arsonists as it is believed by certain sources, then these criminal elements have to be dealt with severely and prosecuted.

c)      Far more important is enabling the broadleaf forests to reestablish itself. One ecologist has beautifully compared the broadleaf forests to Shiva’s tangled hair. Be it the fury of Ganga or fury of Southwest monsoons  the heavy downpour is reduced to a gentle spray as it passes through Shiva’s locks and percolates into the soil to recharge the spring waters.

d)      Equally important is culling of chir pines trees. Though rich in resins these are fire  traps and allow the fire to flourish. These trees did not grow in natural way but have sprung up in the wake of forest fires.

e)      The above processes would rejuvenate the perennial upland springs which have become seasonal today. In a matter of time underground water resources would also be stabilized reducing the flood fury in monsoons.

f)       Wildlife, birds,  butterflies will reclaim their space in this natural habitat.

h)      Educating locals and villagers and making them stakeholders in these conservation endeavors would go a long way.

Forests are self generating community of plants and animals unlike plantations. It is a win-win system. So let Devbhoomi flourish and aptly deserve the name it was given. 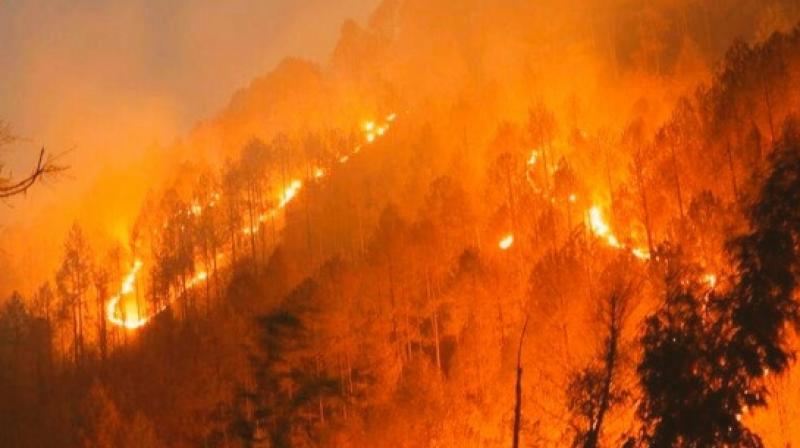