Torrential downpours have been hammering the southern State of Louisiana in US. The floods have already claimed 11 lives, affected 40,000 homes and left many injured. So much so that a state of emergency had to be declared.

Long before the floods are forgotten the following humane  episode however , may be remembered by many in Louisiana.

As the official emergency crew was busy at the rescue, three  Good Samaritans heard the shouts of a woman—- ” I ‘m drowning “. The woman and her pet dog were trapped in her car. The car was quickly sinking in the flood waters.

The three rescuers tried to break the car windows but to no avail. However, one of them quickly tore the fabric of the roof of the convertible and pulled both the woman and her dog to safety. Within seconds the car fully submerged in the waters.

Accidents like this often confront us with the safety of our gadgets. In this ‘ hi-tech ‘ ‘ tech savvy’ world we often forget the inbuilt dangers in them.

In our own country, we read about autolock doors or window panes not opening in cases of accidents. The occupants of the cars have been suffocated or charred to death on account of mechanism failure.

In the above case the woman was lucky to have a fabric roof to the car.

No systems however  are foolproof. But often there are alternatives and small options available. Had she kept her car window open perhaps she could have gotten out and swam away with the dog.

All said and done we do need our gadgets and they must liveup to the tag—– Neighbour’s  envy Owner’s pride. 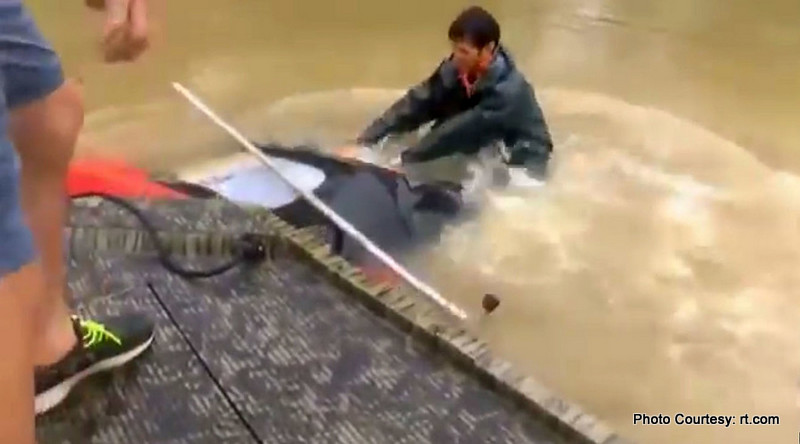