More than one million people faced power outages in the United States on Friday, 23rd Dec 2022,  as the cyclonic winter storm battered the country, cancelling flights, blocking highways and making travel misery for home goers ahead of the holiday season.

Howling winds, heavy snow and frigid air which can turn boiling water into ice instantly have hit most of the nation, including southern states, which are normally temperate. 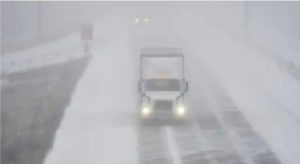 Weather warnings were issued to around 200 million Americans, as -55 Fahrenheit (-48 Celsius) was recorded as the lowest temperature amid chilly wind, the National Weather Service (NWS) stated.

Near-zero visibility, stormy weather and ice-covered roads were reported in Oklahoma, Iowa, North and South Dakota and elsewhere and people were appealed to stay home.In Ohio, one person was killed in a 50-vehicle pile-up, while traffic was snarled in Michigan after the accident of nine tractor-trailers.

New York Governor Kathy Hochul said, “This is an epic, statewide hazard. The roads are going to be like an ice skating rink and your tires cannot handle this.” National weather Service in New York has labeled the storm as “Once in Generation Winter Weather Event”.

By the afternoon of Friday,23rd Dec 2022, the storm took the shape of a “bomb cyclone” after there was a precipitous drop in air pressure in 24 hours. Almost 5,000 flights were cancelled and 7,600 were delayed.

NWS’ lead forecaster Rich Maliawco, while speaking in Glasgow, Montana where overnight wind chill dropped to -60 Fahrenheit, called the weather ‘extremely dangerous’. “With these kinds of wind chills, if you’re not wearing those warm layers… unprotected skin can get frostbite in less than five minutes,” he stated. He said that people have been posting videos of the “boiling water challenge,” where they throw boiling water into the air as it freezes instantly. “We created our own cloud @ -17° F (-27° C) at the #Missoula International Airport,” he added.