The unprecedented   freak emergency pushed Melbourne’s hospital system to its limits, and it is possible some other deaths are yet to be linked to ‘thunderstorm asthma’. Few patients were still in intensive care 72 hrs later, with three in critical condition.

The strain on the city’s resources can be well imagined with a call for ambulance every 4.5 seconds at the peak of the emergency

Thunderstorm asthma occurs when there is a sudden change in weather conditions. The unusual name describes itself.

It is presently spring time in Melbourne. Rye grass fields bordering the city flourish during wet spring. Hot and dry winds drove Melbourne’s temperature to 35 degrees on Monday, before a thunderstorm hit shortly after 6pm. The storm and heavy rain caused rye grass pollen to absorb moisture and burst, dispersing smaller particles. Rain stopped and people got affected with pollen getting trapped in the lungs. The incredible “pollen load” caused the huge wave of breathing issues and cardiac arrests.

Presently the thunderstorm asthma event cannot be predicted. But research is ongoing to create new models to predict the effect of extreme weather on health. The conditions with high grass pollen and those causing thunderstorm are already being monitored around Melbourne. It should be possible with further research and data available from previous events to develop a forecast model, and pre warning can then be issued.

Unpredictable weather patterns and the impact on health   is a new emerging frontier for public health risks. 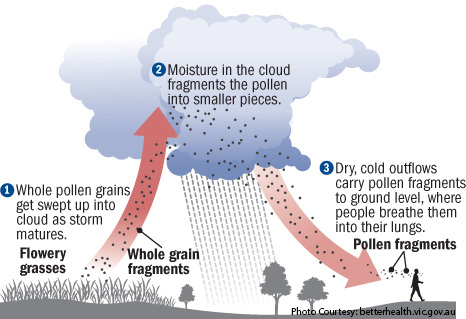